Gemona is now widely recognised as a world class paragliding competition venue.
The venue has also hosted countless Paragliding and Hang–gliding competitions for Italian events. Reliable, it offers mountain and flatland racing.
In the 2018 took place the Pre-Hang-gliding World Championship and in 2019 Hang-gliding World Championship (FAI Cat. I).
The local terrain makes for interesting task setting and plentiful land-out options. Gemona also has some enviable safety features and a very fast and dedicated mountain rescue team.
Accommodation is available to suit all budgets with hotel, camping, landing field, HQ, bar, free wifi etc, is very centrally located making for a great atmosphere at this very friendly venue. The organisation team is very experienced and motivated to provide the pilots with a high quality competition.
Further, the organisers and local club are able to secure sponsorship from the community to assist with the organising of the competition and give you a better return for your entry fee. 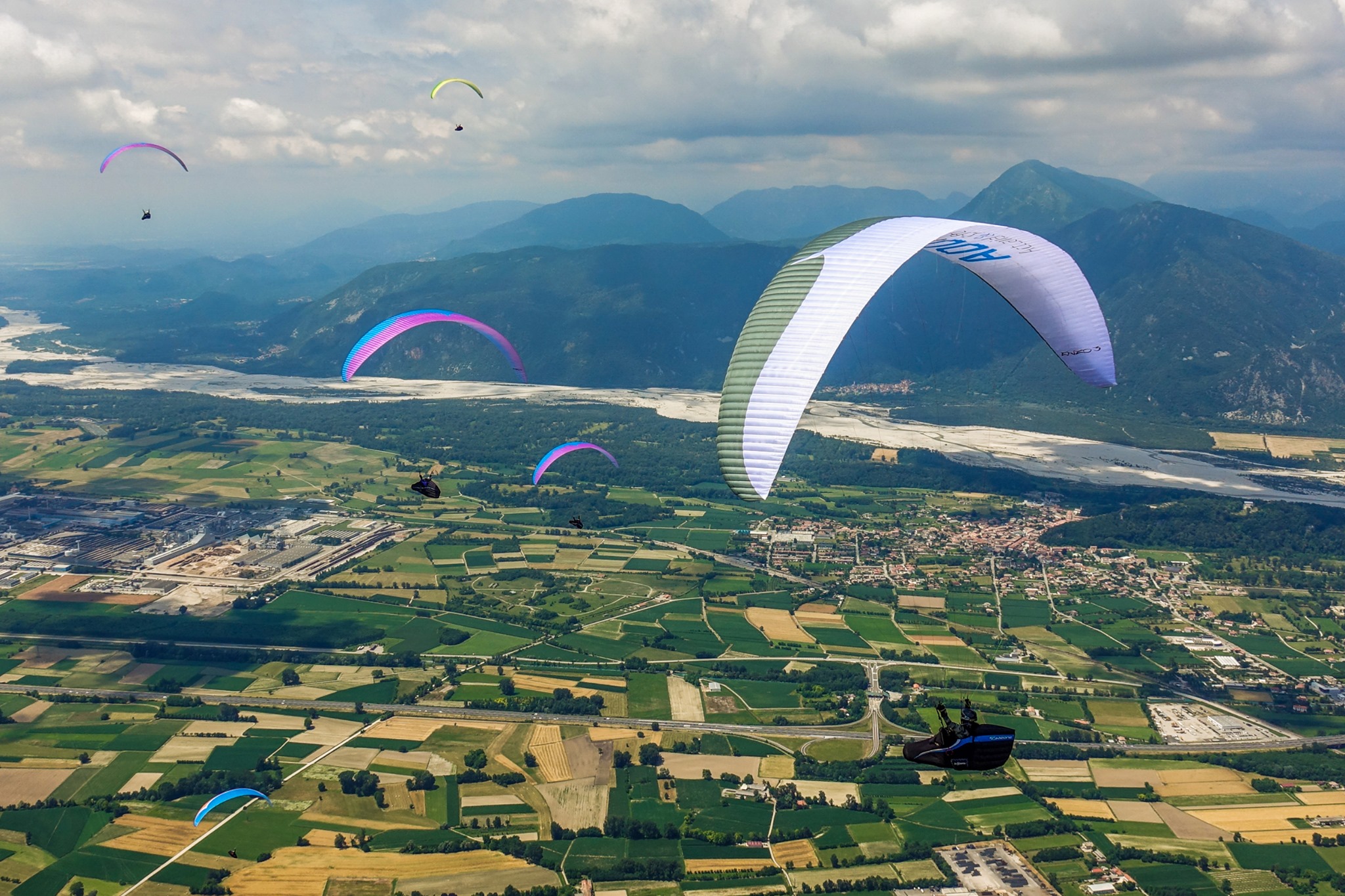 FLYING AREA
The main competition take-off is called “Mont Cuarnan”. It’s large and easily allows for 5 gliders to take off simultaneously (5 slot launch) with ample preparation area for up to 135 pilots. The Mont Cuarnan launch is located on the main Julian Alps mountain range and is south facing. The launch site is 900 metres above the valley floor and faces the flatlands of the Friuli region. To the East you have the expanse of the Julian Alps. To the north the range moves towards the Austrian Alps and to the West you have the Dolomites. Typical tasks would fly in both the Julian Alps and the Dolomites. There are plentiful and easy thermals to keep pilots amused whilst awaiting a start window. There is a large goal field located right next to the town, a short glide from launch.
The access to the launch is by way of a tarmac road suitable for all vehicle types, however the organisers prefer that personal cars are not used by competitors and transport will be arranged for all to get to launch daily, in comfort. The drive is around 40 mins and would typically be done in one drive.
As well as cats-cradle, there are lots of other well-known and reliable skyways to take pilots away from Gemona typically to the South into the flats if the mountain air is particularly unstable, or to the East & West if the air is more stable. There is a nice 30km ridge flight to the border of Slovenia, then returning, or a 10km crossing of the flats, to then continue along the edge of the Dolomites, into the Meduno region.
Temperatures tend to be very comfortable in May and quite warm in July. Typically about 20C+ degrees in May and up to 30C in July.

Cloud base averages about 2,000-2,500metres, but can be as high as 3,000m. Winds tend to be light south-westerly and there are no strong valley breezes to worry about.
This is the Alps, so rain is not unusual, however the dates we have suggested offer fairly reliable periods historically. Gemona offers a very interesting mix of mountain and flatland.
The land out options are usually flat, clear fields. The local people are friendly and sympathetic to the sport. Retrieve roads are sufficient and there are plenty of tracks to pilots that may land in more remote terrain.

ATTRACTIONS
Gemona is host to a variety of local activity and culture. It’s beautiful scenery and peaceful surroundings attract climbers, walkers, mountain bikers and canoeists. Most of these activities are well catered for in Gemona with equipment being easy to rent. The local town also has a variety of restaurants, bars and even a local castle to visit. Local amenities include an indoor swimming pool with facilities for massage. At the location of the HQ there is a bar, beer garden, tavern, restaurant, camping site and a hotel catering for up to 150 pilots.

ACCOMMODATION
There are accommodation options to suit all budgets from several small pensions in the village, a rather nice hotel just outside the village. 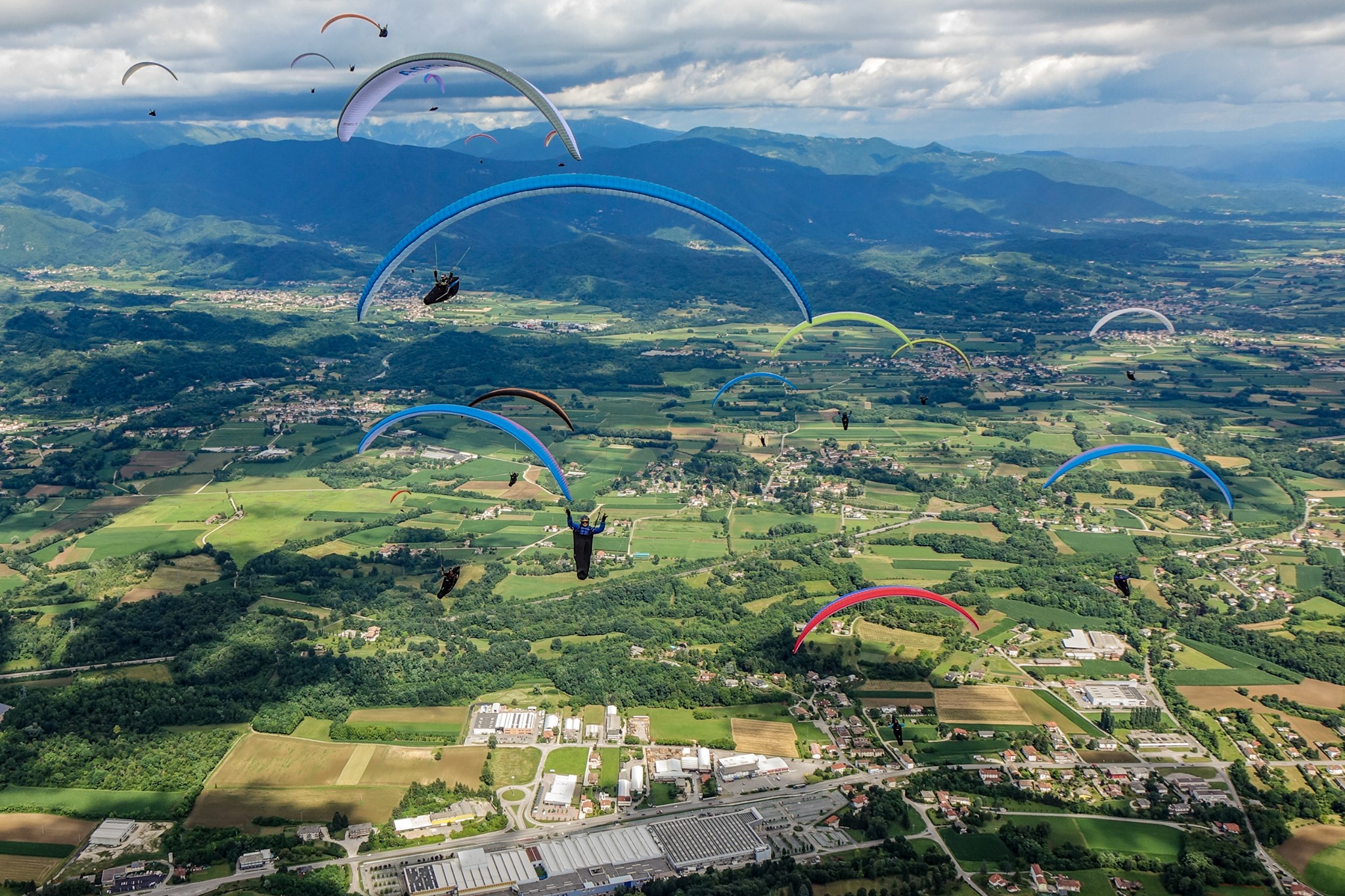 Hotel Willy is the base for the week. It is a large hotel, also with camping alongside (campsite very cheap).
Inside the hotel will be the daily downloads and outside in the mornings will be the daily briefings and departure of transport for the launch point.
The hotel has a restaurant, bar, tavern, beer garden, take away pizza and other facilities.
Camping typically costs 10€ (person and tent/camper). Rooms locally cost from 25-50€ depending on the standard wanted. There are some self-catering options and the campsite also has a restaurant that serves breakfast.

The best  campsite near Gemona is the “Camping Lago Tre Comuni”  one of the most beautiful places in the region (Lake of Tre Comuni).
It’ s about 8 km from the HQ.

There are too many to list. The town is full of them. Happy hunting!

TRANSPORTS
Gemona is situated approximately 150Km from Venice, which has two international airports.
A shuttle service to and from Venice airport will be available immediately preceding and following the competition, if it is needed. Venice airport is around 90 minutes drive from the venue. At Venice airport you can hire cars, use the competition transport or use the rail network for an easy transfer to the Gemona region.

Non task days flying
If you decide to free fly outside of the taskable days then you can find daily transport to launch starting at Bar Stop from around 10.30am daily. This will not however be offered on competition task days.
For non competitors in task days, it’ s possible to fly after or before the competition but,  the transports will be available once competitors transports ended.

Getting from the HQ to the landing field (& back)
There will be some signs around town showing the HQ flag and some arrows. Just follow them! 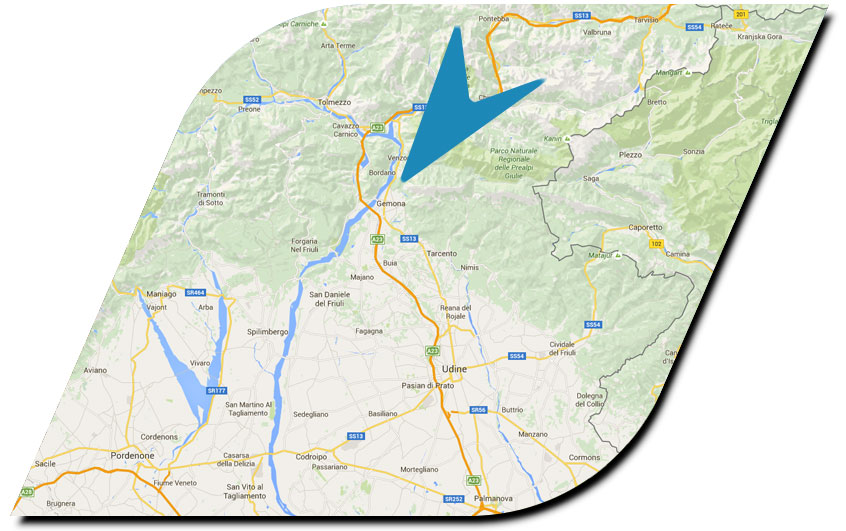